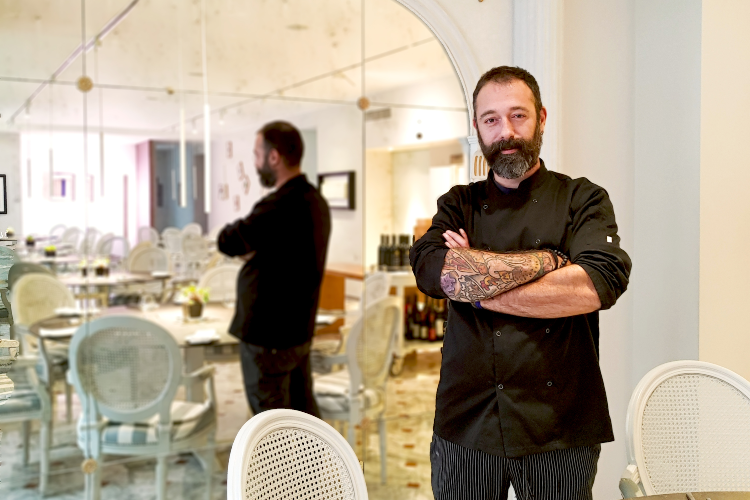 A new restaurant has opened in the historic Alli Due Buoi Rossi hotel, designed for the people of Alessandria and for customers passing through the hotel. So today we welcome Marco Gaiola, who from today will be at the helm of the new Bistrot Cavour in Alessandria.

Originally from Settimo Torinese. He approached cooking during his teenage years after dropping out of high school to undertake his studies at the Le Meridien Institute in Turin, now known as Le Midì. The years of training alternated with various professional experiences, including at the Al Sorji wine shop where he stayed for five years before choosing to set up his own business at the Blues Café. After about three years, he joined the brigade at the Magorabin restaurant.

At the end of his time in Turin, Marco often travelled around Europe and learned the basics of molecular cuisine, first in France, then in Portugal and later in England. His aim was to try to unhinge the "distortions" of Italian cuisine that was offered outside the Italian borders.

After years, he returned to Piedmont, more precisely to the MenoUno restaurant in Casale Monferrato and then to Valle d'Aosta in search of true mountain cuisine. In 2021 he returns to the Alessandria area to run Bistrot Cavour.

A few, uncomplicated ingredients, combined in a tasty and original way: simplicity is a serious thing and is expressed, every day, through the creative vein of the new chef who loves to leave a tangible mark of his unconventional and richly emotional cuisine.

A new food pathway with solid roots in traditional Piedmontese cuisine but which at the same time leads the diner to "play" with food, which here becomes real interaction, through shapes, colours and flavours.

Chef Gaiola will accompany you on this journey, made up of disassembled recipes to be discovered in his ironic and modern key.

Have we intrigued you?

The food proposal of Bistrot Cavour is constantly being renewed.
Click here to discover the menu

We are in Via Cavour 34, Alessandria